There are times when you can see jet airliners way up high above my house. It has to be a clear day, they’re flying at a quite an altitude. You have to look for them. They seem to be moving slowly and silently. The way the light glints off their wings and fuselage, they can be really quite beautiful.

It was just such a beautiful day. I remember that gorgeous September day. I think it was a Tuesday and the kids were off to school. I was very much enthralled with the idea of myself as a singer/songwriter at the time.

I had just put the final touches on a song I’d written and I was wrestling my way through a rendition on my 12 string, sitting in the back yard. (I never did do justice by that guitar – I would eventually sell it.) I distinctly remember the sight of one of those rarely noticed, beautiful, slow, silent jet airplanes overhead – it was heading south, perhaps southwest, for New York or maybe D.C., I assumed, coming out of Boston.

The song I’d written was this enormously earnest, and somewhat overlong, ballad called “Whisper.” I think I was trying to write a peace anthem. At the time the Intifada was raging in the streets of Palestine, and every effort to quell the violence seemed to only make it worse.

In Northern Ireland, the Good Friday Accords seemed to be, at best, a precarious hope, with old angry men and younger dangerous ones still shaking their fists over timeless ‘Troubles.’ Recent history in places like Bosnia, Kosovo and Rwanda hung heavy on my mind as well. I wondered if we humans would ever find the ability to live in peace.

On a beautiful day (such as that day in September) the world could seem to be offering us peace, like some quiet and simple instruction we only needed to accept. Why can’t we hear that whisper? That was the idea anyway. Perhaps I preached a bit much in that song, but that seemed like something worth doing just then. I was proud of myself for using a D-Minor 7th chord in the progression.

That beautiful clear blue morning, as I strummed and sang in the backyard by the white flowered hydrangea, my wife called me inside to the phone. My mother was on the line. Have you been watching TV? There’s been an accident in New York. A plane hit one of the Twin Towers.

As my mother told me what she knew, I assumed that it was a small plane, that this would be one of those small, sad tragedies that occupies the news without really touching us. There would be plenty about it in the papers, probably for a week or more, no need to turn on the TV.

No, this was something more, my mother said. As if only to humor her, I turned on the news. To this day I’m not sure (it was so confused at that moment), but I believe I was watching live as the second plane hit the second tower.

In the song I’d written I was trying to come to terms with the idea of peace, or rather, the lack of it. There was a line in there about forgiveness as an unspent coinage, one we were being asked to give, let alone spend. And there was another line about rage as an empty pavement for empty streets.

As I said, I was preaching.

There was a verse where I imagined a Christ-like figure arriving upon the scene of some safe suburban modern day American town; Christ with his message of even suffering forgiveness. How would he be received? As I think of it now, I suppose for all I was trying to write a song, I was also trying to utter a prayer.

At different times over the past six years I’ve had different opinions of that song I’d just finished writing that morning in September. Sometimes I think of it as a beautiful earnest offering, at others it strikes me as pompous and preachy, maybe even naive. The last time someone asked me to perform it I shrugged it away and begged off. I probably couldn’t play it right now if I tried.

Still, as I realized the date come round again I thought of that song, that light of a beautiful September day, the message that light seemed to convey.

So quiet, almost whispered, a prayer.

In “Personal Histories,” poet and essayist, Tom Driscoll shares a collection of short prose written over the past fifteen years. Touching on topics of war and peace, social justice and citizenship, race and reckoning, politics past and present, historical fact and fiction, this is a book that illustrates the challenges involved with simply being, simply paying attention to the world around and the workings of one’s own mind. A trip to the movies, an online troll spat, an old photograph found in the desk drawer, a conversation overheard at a convenience store, light shining off the wings of an airplane passing overhead —these are the spurs for speculation, consideration and argumentation, even an occasional prayer. 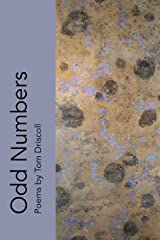 This is Tom Driscoll’s fourth book of poetry. Musing on ideas of history and spirit, offering observational portraits and confessional testimony, “Odd Numbers” is a work of devoted attention.

Odd numbers, these days
as real as beads in your hand,
each their precious shape.

FRAMINGHAM – For Tom Driscoll, writing a poem is like “leaving a trail of bread crumbs” to the moments that give life meaning.

Readers of the Framingham poet’s newest collection will discover pathways to love and loss, doubt, friendship and mortality in the clear speech of a neighbor’s familiar voice.

Titled “Odd Numbers,” Driscoll’s 55 poems reveal his “honest attempt to find meaning” as a husband, father, artist and citizen in an ephemeral world.

END_OF_DOCUMENT_TOKEN_TO_BE_REPLACED


Addressing loss or “absence” —seeking to understand and accept it, maybe even receive some aspect of the lack as blessing, something constant, present, perhaps even permanent —and singing.

Is there praise to be sung
for the quiet hours he let anger pass
alone, unspeaking, for what he managed
not to break or curse, for the long walk north
famous in family lore
for each step, for what he carried into wilderness,
into cold distance, into his pale-skied absence?

Suppose one could share his story, and offer
some telling detail, so free to imagine
tall pine each side of the old logging roads
he travelled; places he stopped along the way,
creatures that watched him from the woods,
his long, long walk,
narrow heaven above.

What he came upon at last was
his history unknown and none to presume
fill his silence with what they thought they knew,
a place where he would neither be reminded
nor asked to forget the sweet face that became his grief.

He might finally have disappeared there completely
when we gave his name to our son.